The iconic Pride Parade, peak of the month-long festival, is back in London on Saturday 7 July! Join the party as thousands of people of all genders, sexualities, race and faith come together for this event every year.

See the Pride in London Parade wind through the West End’s streets from 12pm, with more than 30,000 community representatives, dancers and performers taking part in the 2018 parade. 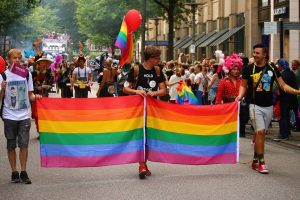 Continue the fun with a dazzling line-up of performers on the Trafalgar Square Stage. Top acts include Sophie Ellis-Bextor, the London Gay Men’s Chorus and the 2018 Pride’s Got Talent winners, as well as the casts of Aladdin, The Lion King and Everybody’s Talking about Jamie.

You’ll also find more entertainment throughout the day at the Women’s Stage in Leicester Square, the Cabaret Stage on Dean Street and the Family Stage in Golden Square.

Soho takes over at night with parties and events in the many pubs, bars and clubs.

The parade sets off from Portland Place at 12pm, moving down Oxford Circus, along Regent Street to Piccadilly Circus, Lower Regent Street, Pall Mall and then passing Trafalgar Square before finishing on Whitehall. 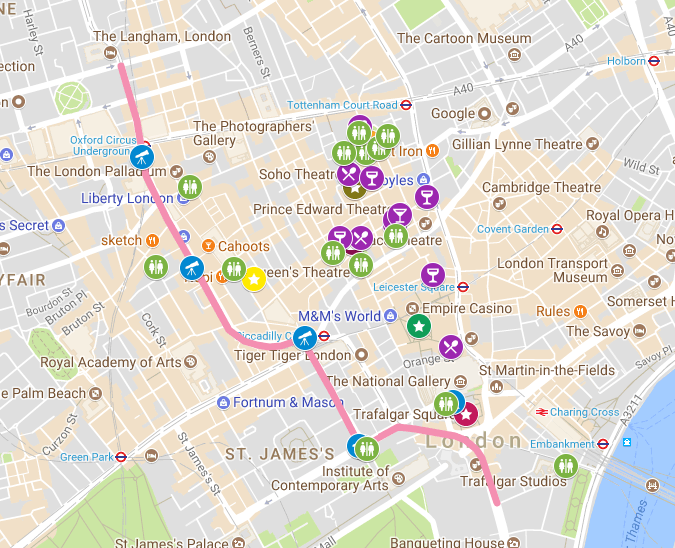 How did LGBT Pride begin?

This Is How LGBT Pride Began In 1972 – Peter Tatchell

On 1 July 1972, GLF held the UK’s first-ever « Gay Pride » march. Our aim was to show that we were proud, not ashamed. Determined to come out of the shadows and stand up for our rights, we wanted to make ourselves visible and demand LGBT liberation. 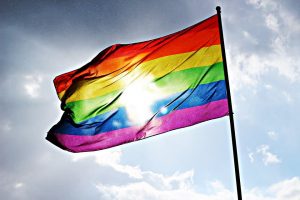 Only 700 people turned up. Most of my friends were too scared to march. They feared that if they were seen at Pride they might be sacked from their job or evicted from their flat.  Despite this intimidation, we were determined to have a fun time and make our point.

The march was a carnival-style parade, which went from Trafalgar Square to Hyde Park. In 1972 homosexuality was still classified as an illness, lesbian mothers had their kids taken off them by the courts, and the police were at war with the gay community. The partial decriminalisation of homosexuality in 1967 (Sexual Offences Act ) was very partial indeed.

Since 1999, we’ve finally won many LGBT law reforms, like equalising the age of consent, repealing Section 28, legal protection against discrimination and same-sex marriage.

But the battle for equality isn’t over yet. Nearly half of all LGBT pupils are bullied at school, there are hundreds of queer-bashing attacks every year and a quarter of the British public still believe that homosexuality is always or mostly wrong. Who are the people behind Pride in London?

Pride in London is wholly run by a group of volunteers who are passionate about equality and diversity. We are a not-for-profit organisation, and any surplus funds we raise are used to support the LGBTQ community and improve the event.

Together, we run the UK’s biggest, most diverse pride, and our job is to make sure we provide a platform for every part of London’s LGBT+ community (lesbian, gay, bisexual, trans*, queer, questioning, intersex, non-binary, asexual, polysexual, genderqueer and gender variant people) to raise awareness of LGBT+ issues and campaign for the freedoms that will allow them to live their lives on a genuinely equal footing.

14 Beautiful Places to visit in London

No matter if you’re a new or experienced Londoner, there are always some secret or beautiful…

What to do this weekend in London: Pride Parade

The iconic Pride Parade, peak of the month-long festival, is back in London on Saturday 7…

The sunny days are here, it’s time to take the sun in a beautiful park or…

An itinerary in London: from Notting Hill to Kensington via Portobello Market

Because they are so many things to see in London, here’s a little itinerary so as…

Some famous stereotypes about British people: True or False?

When moving to another country, we always have some fears and preconceptions about the foreign cultures.…

How to make friends in London

You just arrived in London and you don’t know anyone? Or you have lived here for…

You’re looking for something nice to do this weekend? Here’s a fun activity I recently discovered:…